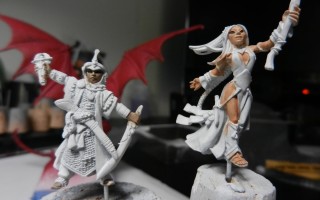 While waiting for the watery layers of Red Dragon to dry, I worked on Kyra’s face. Below is the artwork that I was sent to use as a reference.

I used a base coat of Olive Skin Highlight and Dusky Skin. I mixed it about 50/50. Â A mix of Walnut Brown and a small amount of Black was painted into the eyes. The picture below also has Seoni in there. I started the base coat of skin on her but ended up concentrating on just the Dragon and Kyra. Â I thin my paints down to a watery consistency and build up a base coat in several thin layers. This way, I can layer up to the tone that I want without (hopefully) going beyond that. Using really thin paint can also add to the translucency of skin, depending on the skin tone that you’re going for.

Next, I used Fair Skin Highlight to paint the whites of the eyes and darkened the outer edge with a little more black. I think dark browns look a bit more natural but this model has a deep stare that is better outlined in Black.

At this point, to keep my eyes from crossing, I started highlighting the face a bit. Each of the steps that I paint usually consists of three or four thin layers of paint to get the correct tone. I didn’t take pictures in between each because the effect is very slight and difficult to see with each layer but easier to see after a few.

For these first highlights, I used the base color plus a little more of Olive Skin Highlight. I added very little at a time and washed over the higher points of the face a few times.

Next, I added Dark Shadows for the eyeliner areas and lips. I carefully added the pupils with first Walnut Brown, and then decided to go to Black.

To make the lips stand out a little more and to give them a wet look, I mixed Blood Red with Walnut Brown for the color, and then added Fair Highlight to that mix for the light points

I used the same techniques and color on the hands that I did on the face.

The small tattoos under the eyes were painted with Ultramarine Blue (RMS). Throughout this process I added a small amount of Flow Improver to the mix whenever I had to paint fiddly areas such as the eyes and tattoos. Â It helps make the thinned paint flow with very little pressure. I added the helpful pictures here, but Â there were plenty of times that I had to chase extra paint out of the eyeball or lighten an area that ended up way too dark. It’s a game of experimentation and going between shading and highlighting until everything looks like it should.

The Ultramarine Blue is also the base color of the robes. It doesn’t match the reference picture very well at this point but by time I’m done with the shadows and highlights, it will be a lot closer.